The Functional Logic of the Odor Information Processing Circuits

Odorant Transduction and Combinatorial Encoding in the Antenna

A key functionality of olfactory sensory neurons (OSNs) in the Drosophila antennae is to jointly encode both odorant identity and odorant concentration. The identity of an odorant is combinatorially encoded by the set of responding OSN groups expressing the same receptor type, and the size of OSN set varies as the concentration changes. The temporal response of an OSN simultaneously represents the information of odorant concentration and concentration gradient. We advanced a comprehensive model of fruit fly OSNs as a cascade consisting of an odorant transduction process and a biophysical spike generator. Open source code and documentation is available as part of the FlyBrainLab Odorant Transduction Library.

Predictive Coding in the Antennal Lobe

We depict below a comparison between two models of the antenna and antennal lobe circuit of the adult fly based on the FlyCircuit (left) dataset (Chiang et al., 2011) and an exploratory model based on the Hemibrain (right) dataset (Scheffer et al., 2020). For more details, see 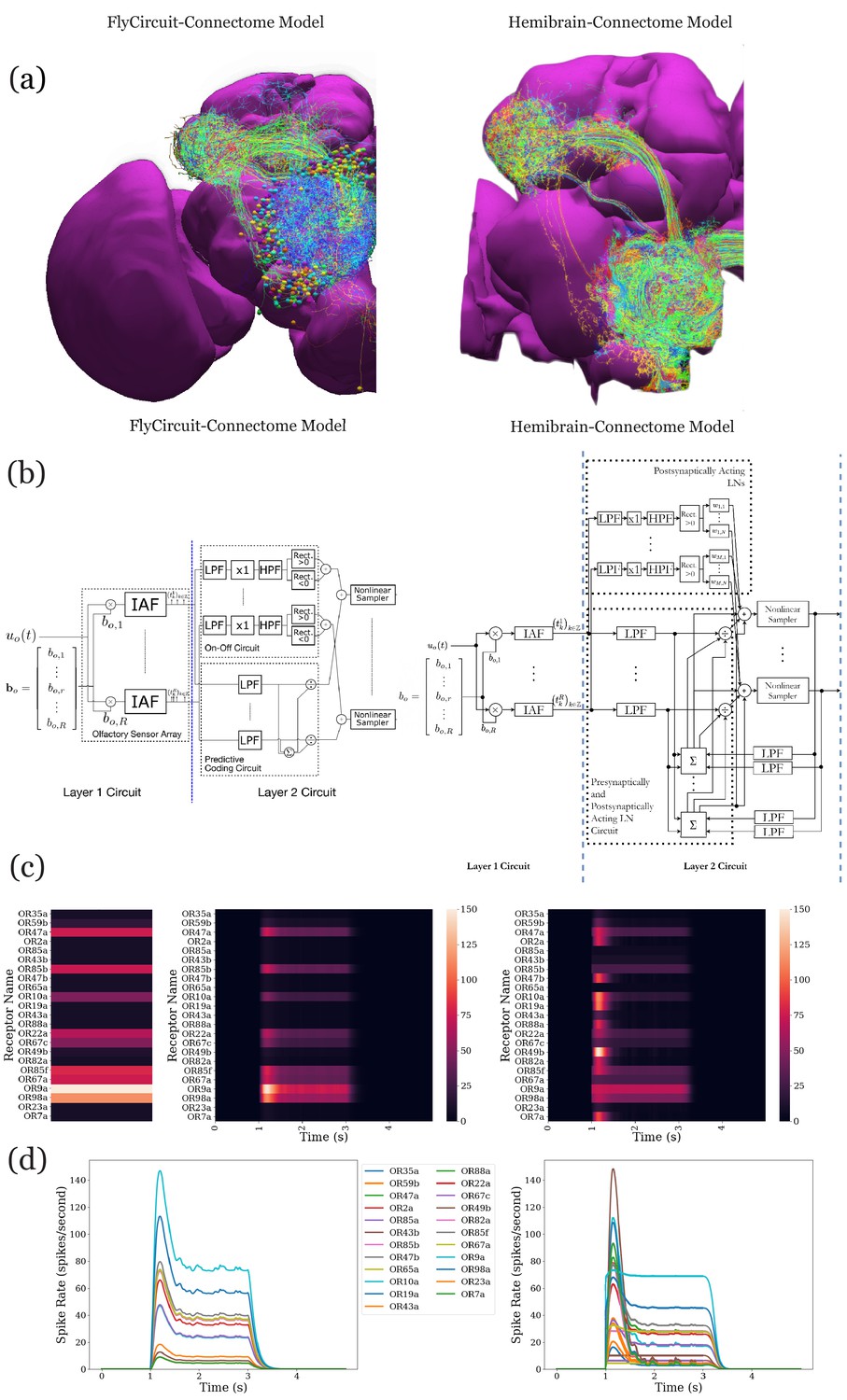 (a) Morphology of olfactory sensory neurons, local neurons, and projection neurons in the antennal lobe for the two datasets. The axons of the projection neurons and their projections to the mushroom body and lateral horn are also visible. (b) Circuit diagrams depicting the antenna and antennal lobe circuit motifs derived from the two datasets. (c) Response of the antenna/antennal lobe circuit to a constant ammonium hydroxide step input applied between 1 s and 3 s of a 5 s simulation; (left) the interaction between the odorant and 23 olfactory receptors is captured as the vector of affinity values; (middle and right) a heatmap of the uniglomerular PN PSTH values (spikes/second) grouped by glomerulus for the two circuit models. (d) The PN response transients of the two circuit models for uniform noise input with a minimum of 0ppm and a maximum of 100 ppm preprocessed with a 30 Hz low-pass filter (Kim et al., 2011) and delivered between 1 s and 3 s. 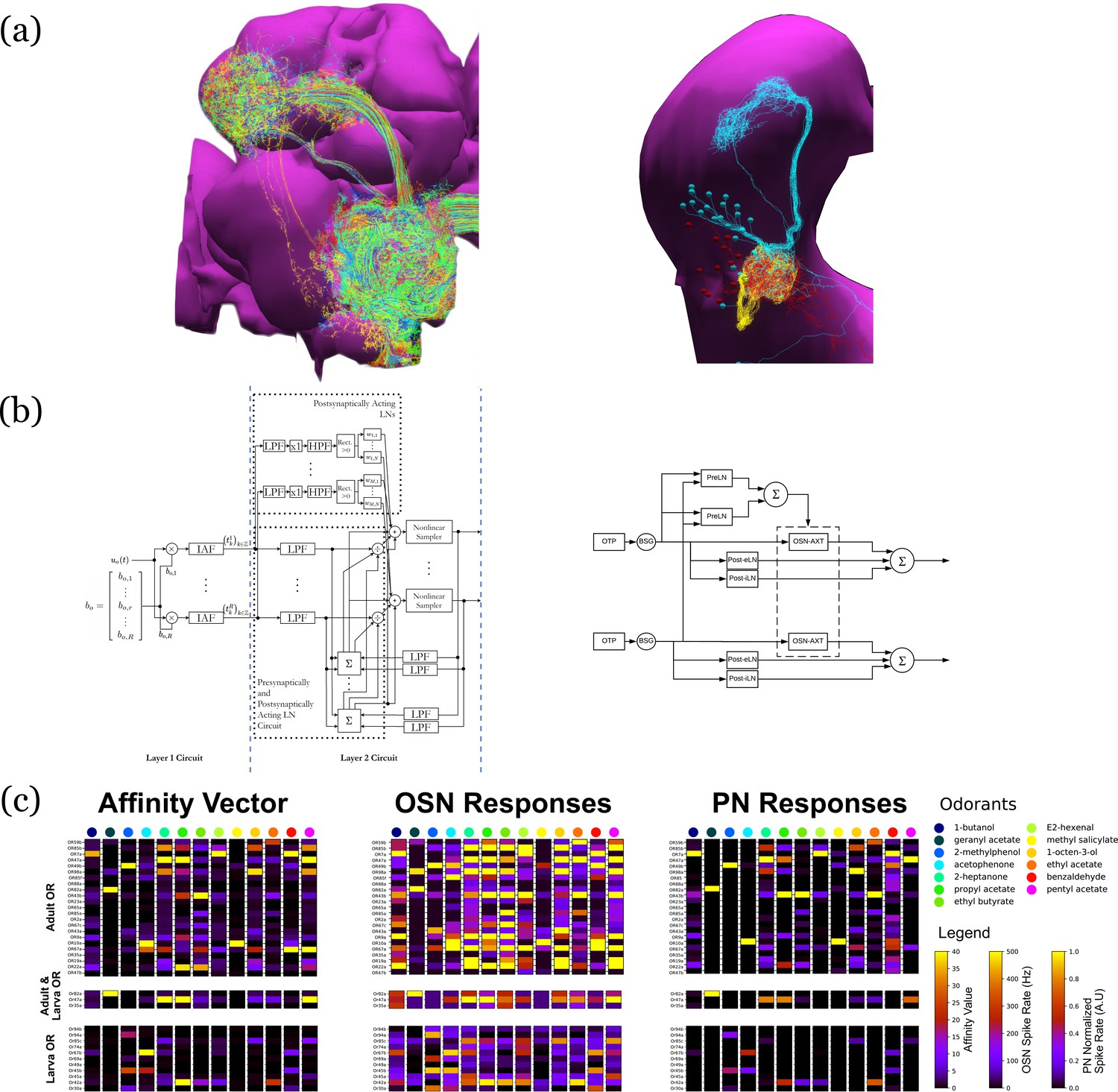 (a) Morphology of olfactory sensory neurons in the antenna, local neurons and projection neurons (PNs) in the antennal lobe. (b) Circuit diagrams depicting the antenna and antennal lobe circuit motifs. (c) (left) Interaction between 13 odorants and 37 odorant receptors (ORs) characterized by affinity values. The ORs expressed only in the adult fruit flies are grouped in the top panel; the ones that are expressed in both the adult and the larva are grouped in the middle panel; and those expressed only in the larva are shown in the bottom panel. Steady-state outputs of the EOS models to a step concentration waveform of 100 ppm are used to characterize combinatorial codes of odorant identities at the OSN level (middle) and the PN level (right).

Functional Role of the Mushroom Body

The mushroom body (MB) as a memory processor involved in associative learning that enables flies to navigate in complex environments. To guide navigation, the MB integrates internal states and a diverse palette of sensory data including olfactory, visual, mechanosensory, and motion control information and forwards the processed information streams to, among others, motor control.

In Vivo Recordings in the Early Olfactory System

To address this limitation, we developed a novel in vivo experimental setup with precise and reproducible delivery of airborne stimuli. This experimental setup enabled us to apply system identification methods to OSNs in Drosophila. We applied time-varying odorant stimuli and recorded in vivo the response of Projection Neurons (PNs) postsynaptic to OSNs. These novel type of recordings have shown that individual OSNs and PNs encode the gradient and acceleration of odorant concentration waveforms, respectively. This research was performed in collaboration with Dr. Richard Axel in the Axel Laboratory.