The Functional Logic of the Visual Information Processing Circuits

PhotoTransduction in the Retina of the Fruit Fly

The Drosophila Retina has been extensively characterized in the literature in terms of structure, connectivity and function. Our investigations provide a detailed description of the algorithms required for a full-scale parallel emulation of the fruit fly Retina including (i) the mapping of the visual field onto the photoreceptors, (ii) the phototransduction process, and (iii) the parallel processing of the visual field by the entire Retina. We also provided detailed algorithms, their implementation and their visual evaluation with moving images on GPUs.

The retina and the lamina neuropil of the early visual system of the fruit fly brain are, respectively, described by the publications below. Open source code and documentation is available as part of the FlyBrainLab Retina PhotoTransduction Library.


The video above shows a visual evaluation of the fruit fly retina as a parallel information pre-processor. The light intensity of the original scene is shown on the top left. The red circle indicates the visual aperture of the eye. The logarithm of the original scene is shown on the top right. On the bottom left, “Visual Aperture” shows the projection of the area inside the red circle in the original scene onto the hemispherical visual field. “Input to R1” shows the rate of photons arriving at the R1 photoreceptors. “Delayed by 40 [ms]” shows the “Input to R1” delayed by 40 [ms]. “log(Visual Aperture)”, “log(Input)” and “log(Delayed by 40 [ms])” show the log of the plot in, respectively, “Visual Aperture”, “Input to R1” and “Delayed by 40 [ms]”. Note that “Input to R1” is the actual input to the photoreceptors. On the bottom right, the responses of photoreceptors R1-R6 are shown, respectively, in each block. All hemispheres are viewed orthogonal to their base plane. As a result, they appear to be circular.

The photoreceptor/amacrine cell layer of the early vision system of the fruit fly rapidly adapts to visual stimuli whose intensity and contrast vary orders of magnitude both in space and time. We proposed a spatio-temporal divisive normalization processor (DNP) that models the transduction and the contrast gain control in the photoreceptor and amacrine cell layer of the fruit fly. It incorporates processing blocks that explicitly model the feedforward and the temporal feedback path of each photoreceptor and the spatio-temporal feedback from amacrine cells to photoreceptors. We demonstrated that with some simple choice of parameters, the DNP response maintains the contrast of the input visual field across a large range of average spatial luminance values. 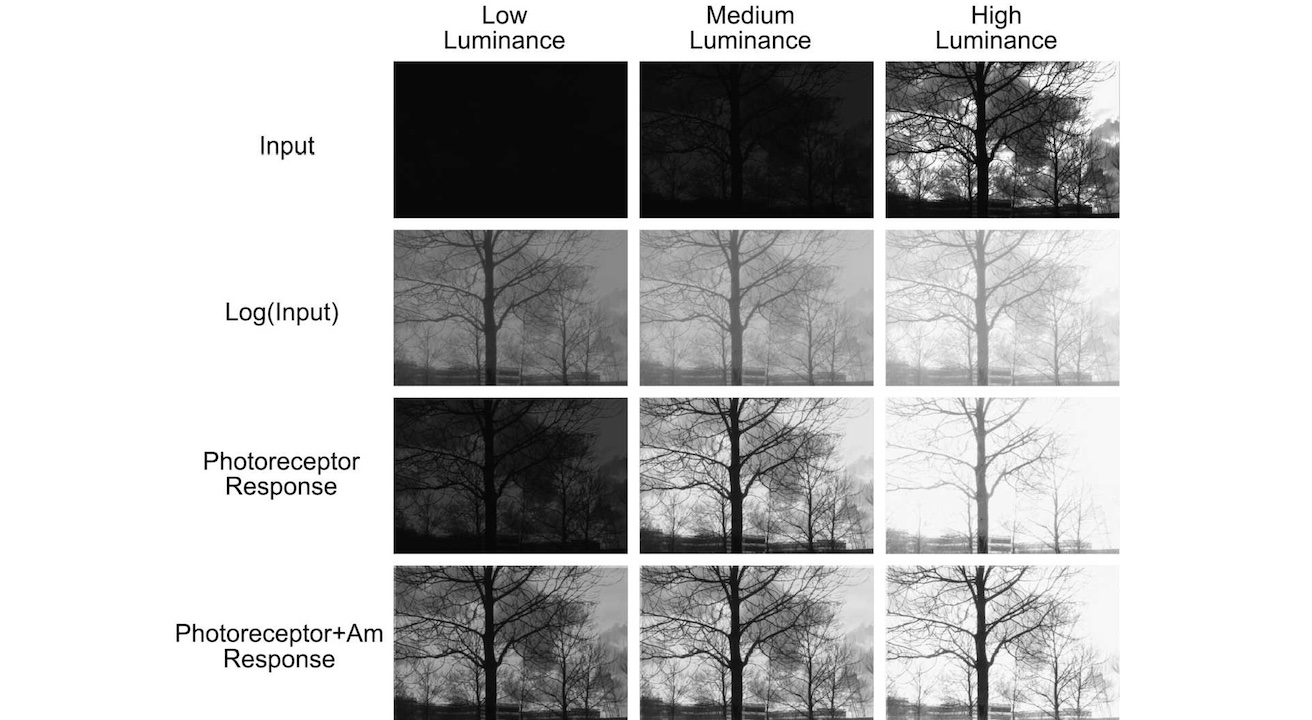 Spatial phase in an image is indicative of local features such as edges when considering phase congruency. We have devised a motion detection algorithm based on local phase information and constructed a fast, parallel algorithm for its real-time implementation. Our results suggest that local spatial phase information may provide an efficient alternative to perform many visual tasks in silico as well as in vivo biological vision systems.