FlyBrainLab is an open-source interactive computing platform for studying the function of executable circuits constructed from fruit fly brain data. FlyBrainLab is designed with three main capabilities in mind schematically depicted in the figure below:

The Architecture of the FlyBrainLab

The architecture of the FlyBrainLab consists of 3 key building blocks: the NeuroArch Database, the Neurokernel Execution Engine and the NeuroMynerva User Interface. 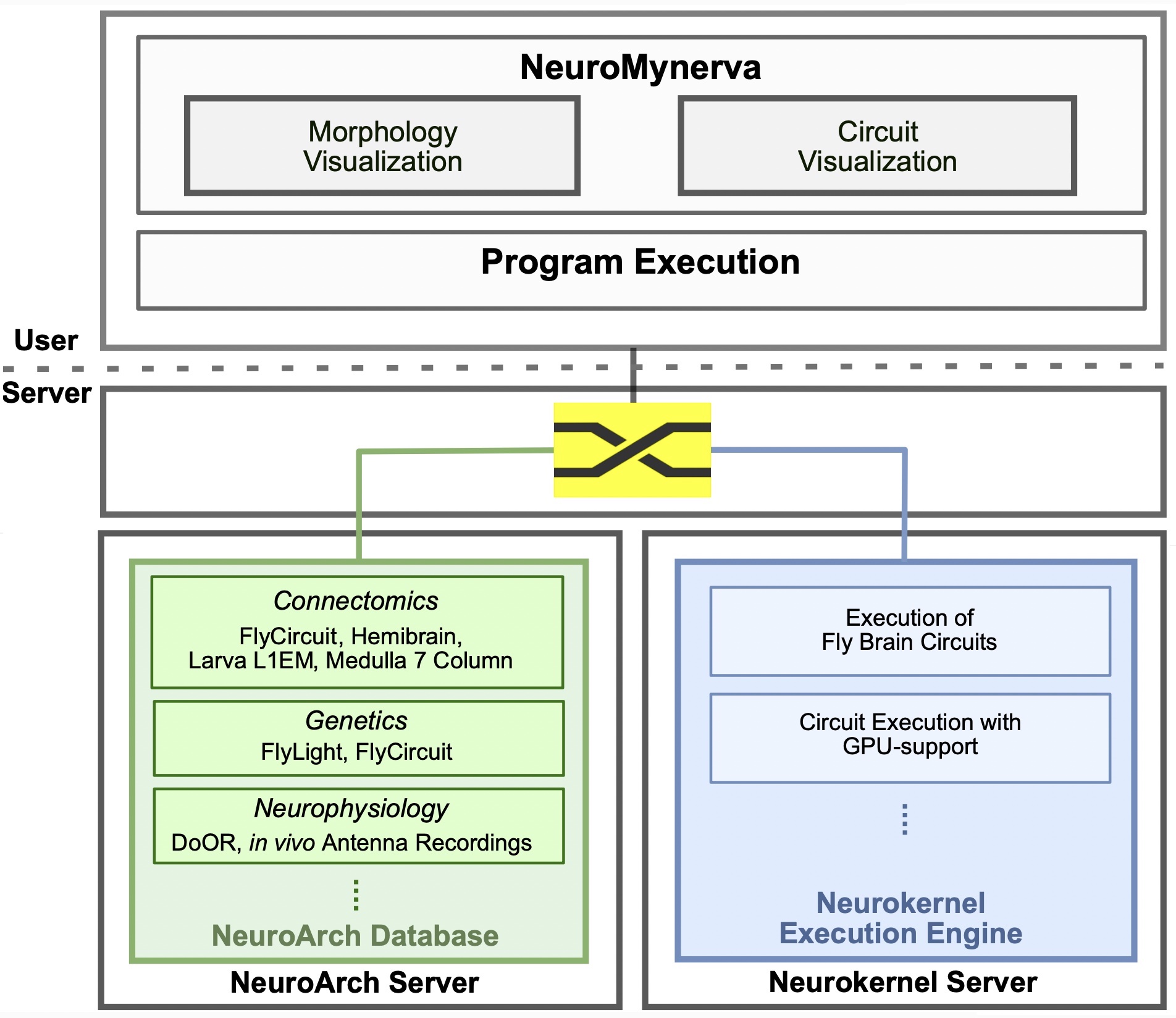 1. Accelerating with FlyBrainLab the Discovery of the Functional Logic of the Drosophila Brain in the Connectomic and Synaptomic Era, eLife , February 2021.

NeuroMynerva is the user interface of FlyBrainLab. It is a browser-based application that substantially extends upon JupyterLab to combine the functionality of NeuroNLP for 3D visualization and exploration of fly brain data, and of NeuroGFX for interactively exploring the function of executable neural circuits using interactive circuit diagrams. Both can interoperate with code execution in a Jupyter notebook. NeuroMynerva Code Repository.

For a description of the UI see

1. Aurel A. Lazar, Tingkai Liu, Mehmet K. Turkcan, and Yiyin Zhou, Accelerating with FlyBrainLab the Discovery of the Functional Logic of the Drosophila Brain in the Connectomic and Synaptomic Era, eLife , February 2021.

NeuroArch is the first graph database that provides a novel data model for representation and storage of connectomic, synaptomic, cell type, activity and genetic data of the fruit fly brain with cross-referenced executable circuits. The NeuroArch data model is the foundation of the integration of fruit fly brain data and executable circuits in FlyBrainLab. NeuroArch Code Repository.

Neurokernel is the first GPU-based execution engine for emulating the fruit fly brain. It provides a comprehensive API ensuring that independently developed brain circuit models of different brain regions are interoperable and can be combined into a whole brain emulation. Neurokernel Code Repository.